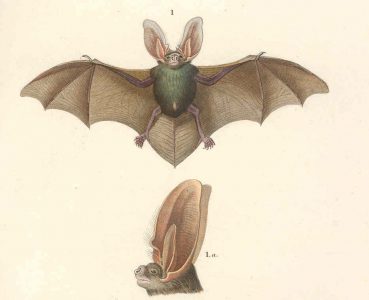 The Brown long-eared bat is a medium sized Irish bat species, their extremely large ears in relation to body size makes them an easy species to identify. The ears are up to three quarters the size of the total head and body length measuring 2.5cm. Each ear has twenty-four distinctive folds on its surface believed to help funnel sounds more effectively. When resting the ears are folded or curled and held backwards, sometimes hidden behind the wings. The eyes are large and bright positioned above a bulging nose on its pinkish brown face.

Fur colour on the back is light brown with a more yellowish to brown on the undersides, the fur is long and fluffy. Juveniles of the species are a paler grey all over. The wings are broad and have a pale grey to semi-transparent appearance measuring up to 30cm in length. Flight is slow and fluttering but highly maneuverable. Body length ranges from 3.7 to 5.3cm.

Adults weigh 12 grams in autumn at their heaviest just before they begin hibernation in their winter roosts losing up to half of their body weight before emerging in Spring. They emit sharp clicks and chirps while hunting at the ultrasonic range of 25 – 50 kHz which is weak for bats, making them hard to hear with a bat detector.

This bat species prefer habitats that are sheltered, fairly open deciduous and coniferous woodland and parkland or well-wooded gardens. Summer roosts which act as nurseries are established in tree holes, bird and bat boxes and in caves, they have adapted well to living in urban areas and are the most frequent species of Irish bats which can be found in attics and cracks in buildings. Summer roost colonies are large and can contain up to fifty individuals composed of a mixture of both male and females which is unusual for an Irish bat species. The brown long-eared bat will sometimes remain in the same roost year round but typically have a second roost site in winter found in more insulated areas such as within deep hollows of large trees or in underground caves. They are more resistant to colder conditions than other bat species found in Ireland so they will often be located at the entrance to caves. They have been known to share roost sites and habitats with the lesser horseshoe bat species.

Brown long–eared bats are a nocturnal species generally emerging within an hour of sunset, they usually make a series of short flights within the roost before emerging to hunt for up to one hour with intermittent flights throughout the night. They generally forage within 2km of the roost site in woodlands, near mature trees or along stone walls in search of nocturnal insects. Brown long-eared bats use a hunting method known as foliage gleaning which means they pick up their prey directly from the leaves of trees and shrubs and in some cases off the ground. Their prey includes spiders, caterpillars, beetles, moths and earwigs which they locate with their sensitive ears and by sight. They can also catch flying insects on the wing using echolocation but are not as skilled at this hunting technique as other species of Irish bat due to their weak ultrasound pulses. When larger prey is caught the bat will carry it to a favorite feeding perch where it can be eaten while resting.

Mixed-sex groups will start to form by the end of summer with the mating season beginning in September and often continuing throughout the winter period. By this time males are coming into breeding condition and often lose a lot of weight due to the development of their reproductive organs which need to be maintained with a high body temperature. Males establish harems which must be defended from other breeding males. Most females will not mate until they enter the hibernation roost delaying fertilization until after hibernation in Spring. Breeding females usually produce a single offspring which is born into the maternity roost in July. Newborn’s eyes will open after four days with their ears becoming fully erect after the second week. Fed exclusively on its mother’s milk for the first three weeks of life the young are left in the roost while the female hunts at night. Weaning is complete after six weeks by the start of Autumn. Regular practice flights within the roost allow the young bats to become expert flyers after only one month. As with all other Irish bat species parental care is given only by the mother. The average lifespan for a brown long-eared bat in Ireland is around 5 years on average, but some individuals have been recorded to have lived for 20 years.

All bat species are legally protected under Irish, European and International legislation. It is illegal to handle, disturb or interfere with bats or their roosts.