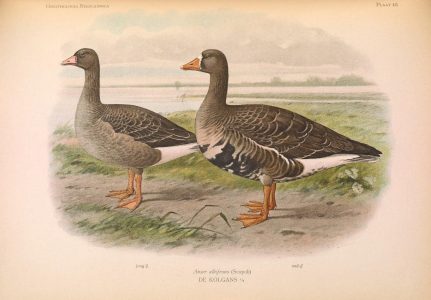 The White Fronted Goose is named because of the characteristic white blaze across their foreheads, but this is absent in the juveniles. The birds breed in Greenland and Siberia typically on lowland tundra, often by lakes and rivers.

They migrate to Ireland in October to April to enjoy our comparatively mild winters and are most commonly spotted in the wetlands of Wexford and Western Ireland.

One of their most characteristic features is their orange-yellow bills. Although occasionally birds from Siberia are found in Ireland and these can be identified due to their pink bills. The Greenland population tend to visit Ireland and Scotland while the Russian population favour England and Wales.

Astonishingly about half of the world’s population of Greenland White Fronted Goose overwinter in Ireland. Ireland’s wetlands are therefore very important for the conservation of this species and they are particularly threatened by the on-going drainage of Ireland’s wetlands.

It is possible to see them in flocks of hundreds or even thousands grazing on a range of plant material including roots, tubers, shoots and leaves.