Species of the week: Common puffball 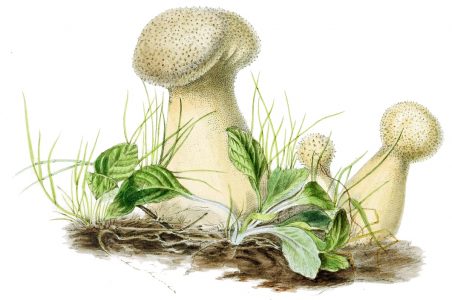 The fruit body ranges in shape from pear-like with a flattened top, to nearly spherical, and reaches dimensions of 1.5 to 6 cm wide by 3 to 7 cm tall. It has a stem-like base. The outer surface of the fruit body (the exoperidium) is covered in short cone-shaped spines that are interspersed with granular warts. The spines, which are whitish, gray, or brown, can be easily rubbed off, and leave reticulate pock marks or scars after they are removed. The base of the puffball is thick, and has internal chambers. It is initially white, but turns yellow, olive, or brownish in age. The reticulate pattern resulting from the rubbed-off spines is less evident on the base.

In maturity, the exoperidium at the top of the puffball sloughs away, revealing a pre-formed hole (ostiole) in the endoperidium, through which the spores can escape. In young puffballs, the internal contents, the gleba, is white and firm, but turns brown and powdery as the spores mature. The gleba contains minute chambers that are lined with hymenium (the fertile, spore-bearing tissue); the chambers collapse when the spores mature. Mature puffballs release their powdery spores through the ostiole when they are compressed by touch or falling raindrops. A study of the spore release mechanism in L. pyriforme using high-speed schlieren photography determined that raindrops of 1 mm diameter or greater, including rain drips from nearby trees, were sufficient to cause spore discharge. The puffed spores are ejected from the ostiole at a velocity of about 100 cm/second to form a centimeter-tall cloud one-hundredth of a second after impact. A single puff like this can release over a million spores.

The spores are spherical, thick-walled, covered with minute spines, and measure 3.5–4.5 μm in diameter. The capillitia (threadlike filaments in the gleba in which spores are embedded) are yellow-brown to brownish in color, lack septae, and measure 3–7.5 μm in diameter. The basidia (spore-bearing cells) are club-shaped, four-spored, and measure 7–9 by 4–5 μm. The basidia bear four slender sterigmata of unequal length ranging from 5–10 μm long. The surface spines are made of chains of pseudoparenchymatous hyphae (resembling the parenchyma of higher plants), in which the individual hyphal cells are spherical to elliptical in shape, thick-walled (up to 1 μm), and measure 13–40 by 9–35 μm.

The puffball grows in fields, gardens, and along roadsides, as well as in grassy clearings in woods. It is edible when young and the internal flesh is completely white, although care must be taken to avoid confusion with immature fruit bodies of poisonous Amanita species. L. perlatum can usually be distinguished from other similar puffballs by differences in surface texture.

Several chemical compounds have been isolated and identified from the fruit bodies of L. perlatum, including sterol derivatives, volatile compounds that give the puffball its flavor and odour, and the unusual amino acid lycoperdic acid. Laboratory tests indicate that extracts of the puffball have antimicrobial and antifungal activities.