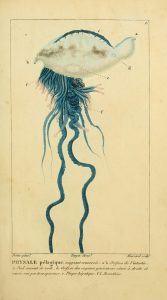 An exotic visitor, these unusual creatures occasionally appear in Irish waters during summertime bouts of good weather. While they are often mistaken for a jellyfish they are in fact a siphonophore – a colony of small animals working together as one whole in order to survive. Well known for their size and stinging tentacles they are referred to colloquially by a variety of names including blue-bottle and the floating terror. They are unlikely to be mistaken for other species in Irish waters given their blue-purple colouring and general appearance.

The Man O’ War lives at the surface of the sea, with only the inflated gas-bladder or pneumatophore being visible, however the tentacles below can be up to 50m long. They are carnivores and feed on smaller marine organisms that stray into the tentacles such as fish, jellyfish and plankton.
They have no means of individual propulsion. Like the by-the-wind-sailor Velella velella they use their uppermost polyp to catch the wind and sail across the ocean surface. They often float in groups of up to 1000 and appear in Irish waters if south-westerly breezes prevail and carry them from their tropical habitats. They can be blown onto beaches and are still capable of stinging while beached and even while dead. Detached tentacles can also sting. The discovery of one Man O’ War usually means there are others in the vicinity. The stings are very painful and require medical treatment but are rarely fatal to humans.

There are a few species of fish that can live in and around the Man O’ War. These include the shepherd fish, Nomeus gronovii, which has developed partial immunity to their stinging venom and can live amongst the tentacles. It feeds on the smaller tentacles near the gas bladder. Additionally some of the clown fish family, Amphiprioninae, can swim amongst the stinging tentacles unaffected owning to their thick coat of mucus. These relationships are thought to be symbiotic as the sight of these fish attracts others which the Man O’ War can then prey on.

Despite their size and venom the Man O’ War is preyed upon by many organisms. The sunfish Mola mola is known to consume them as is the loggerhead turtle Caretta caretta. They are also preyed upon by the violet sea snail Janthina janthina. To avoid threats on the surface the Man O’ War can briefly deflate the bladder and sink.