Species of the week: Marmalade Hoverfly 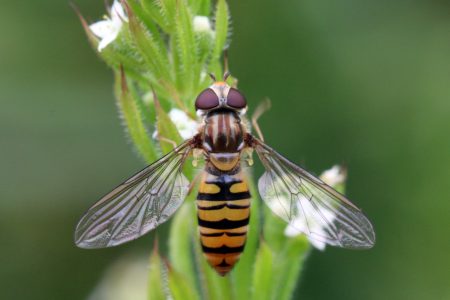 E. balteatus is a relatively small hoverfly (9–12 mm) of the Syrphidae family. The upper side of the abdomen is patterned with orange and black bands. Two further identification characters are the presence of secondary black bands on the third and fourth dorsal plates and faint greyish longitudinal stripes on the thorax. Some specimens also show white bands on the abdomen, whilst other forms are quite dark.

As in most other hoverflies, males can be easily identified by their holoptic eyes, i.e., left and right compound eyes touching at the top of their heads.

Adult Marmalade Flies feed on pollen and nectar. It is among the very few species of flies capable of crushing pollen grains and feeding on them.

The larva is terrestrial and feeds on aphids.

The Marmalade fly can be seen from January to December in a wide range of habitats. Adult flies hibernate during the winter, but emerge on mild days to forage. Numbers peak in August and can be boosted by an influx of migrants. They often form dense migratory swarms.