Species of the week: Oak Moss

Evernia prunastri is a species of lichen, it has no official English name but is known as Oak Moss. Lichens that are attached only at the base are called fruticose and E. prunastri is the commonest in this group.

It has a strap-shaped body, with fork-like branches hanging down from the basal attachment. The upper surface of the branches is grey-green but the undersides are white. Oak moss grows primarily on the trunk and branches of oak trees, but is also found on the bark of other deciduous trees and conifers such as fir and pine.

It is commercially harvested in south-central Europe and exported to France where its fragrant compounds are extracted and used as perfume fixatives and form the base notes of many fragrances. The lichen has a distinct odour, described as woody, sharp and slightly sweet. Oak moss growing on pines has a turpentine odour that is valued in certain perfume compositions.

Oak moss had many uses in the past. It was once ground-up with rose petals to make a hair powder to whiten wigs and kill off head lice! 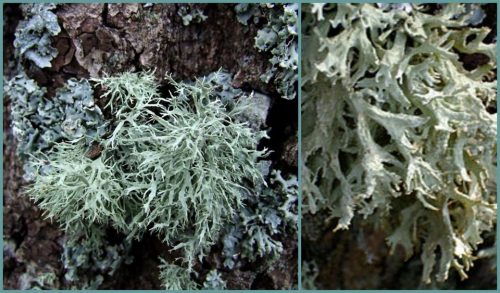