Species of the week: Marsh fritillary 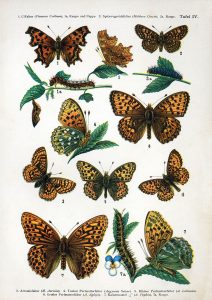 The Marsh Fritillary Butterfly is one of Ireland’s few legally protected Butterflies. It is protected under Annex II of the European Union Habitats and Species Directive.
They have an orange and cream square pattern on their wings and can be identified by their distinctive cream bands on their underwing.

They are threatened throughout Ireland but can be found across Europe and as far east as Asia, their numbers have been declining steadily throughout the world over the past few decades due mainly to habitat loss as land is being changed and improved for agriculture and forestry.
The Marsh Fritillary butterfly is found in wet or marshy areas hence its name, the adult butterflies fly from May to June and can be effected by the weather during bad years with a late summer they can take longer to develop and may not fly until a few weeks later.

They rely on Devil’s Bit Scabious, Succisa pratensis, for their lifecycle. It is a blue flowering plant with broad leaves and it is vital to the survival of the marsh fritillary. This plant can grow in a variety of habitats but with agricultural intensification and traditional farming practices declining they are not as abundant as they once were.

The mature adults lay their eggs under the leaves of the plant in large numbers the larvae or caterpillars hatch from them roughly 30 days later in early to mid-June and spin webs around the leaves of the devils bit scabious. They can live in large groups together creating small areas of dense webs and can be seen in late September.

The larvae stay together in colonies until March when they pupate or create a cocoon, they emerge as adults in early April to May on the leaves or twigs of the scabious plant. The emerging adults then start the lifecycle again, they can survive for about two to three weeks.