Species of the Week: Nettle 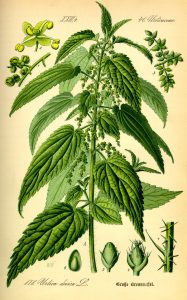 The Common or Stinging Nettle is a highly successful plant found all over the temperate areas of the world. It spreads by means of seeds and underground rhizomes that creep around just under the surface of the soil. The jagged leaves held in pairs along the square stems are easily recognisable particularly after having experienced the sting. The plant itself is variable growing from 0.6 to 2 metres plus in height and can be found in a variety of habitats and soil types.

The stinging structure of the nettle is very similar to the hypodermic needle although it predates that man-made invention by millions of years! Each sting is actually a hollow hair stiffened by silica with a swollen base that contains the venom. The tip of this hair is very brittle and when brushed against, no matter how lightly, it breaks off exposing a sharp point that penetrates the skin and delivers its stinging payload.

It used to be thought that the main constituent of the sting was formic acid – the same chemical used by ants, giving that never forgotten burning sensation that demands to be scratched. Although formic acid is present in the sting, recent research has shown that the main chemicals are histamine, acetylcholine and 5-hydroxytryptamine (serotonin). A fourth ingredient has yet to be identified.

Remember when stung a natural remedy will often be found close-by, the leaves of the dock contain chemicals that neutralise the sting and cool the skin.

The nettle is one of our most important native plants for wildlife, it supports many species of insect including some of our most colourful butterflies. This may seem strange given the stinging power of the nettle but it is the presence of the stings that has allowed the relationship with numerous insect species to develop. The stinging hairs of the nettle developed as a defence against grazing animals. So effective are they that few grazers will touch nettles when the stings are active. This makes the ideal habitat for insects as there is little danger of the adult insects or larvae ending up in the stomach of a cow! Insects can also move between the spines without activating the sting.

The most notable nettle patch inhabitants are the small tortoiseshell, comma, red admiral and peacock butterfly larvae which feed in large groups hidden in silken tents at the top of the nettle stems. You will also find moth species such as burnished brass, the spectacle, and beautiful golden Y

Many nettle patches hold overwintering aphids which swarm around the fresh Spring growth and provide an early food source for ladybirds. These same aphids are eaten in large numbers by blue tits and other woodland birds agile enough to dart around the stems.

In late summer the huge quantity of seed produced provide a food source for many of our seed eating birds.

The nettle plays a very important role for both rural and urban wildlife – let’s start to look at the nettle patch in a different light.

Featured image by NickyPe from Pixabay.