Species of the week: Raft Spider 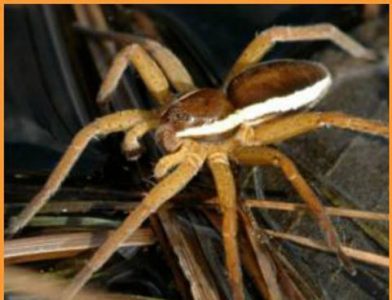 Ireland’s largest spider, the Raft Spider, lives within our bogs and fens. The female (remember female spiders are larger than male spiders) spider’s body measures up to 22 millimetres long and leg span up to about 70 millimetres.

We associate spiders with dry land but the Raft spider is semi-aquatic. When alarmed it can dive under water and remain submerged for several minutes, hidden from the predator.

Their European name, fishing spider, is more suitable as like other Dolomedes they do not build webs to feed but hunt. A raft spider often waits motionless on the water’s edge or on floating vegetation with two feet in the water. When it feels ripples from the prey, it runs across the water to attack. Air bubbles get trapped on the spider’s hairy body and legs. These help it to float on water. Raft spiders are big enough to catch small fish e.g. stickleback, water insects, snails, tadpoles and even small frogs and then race back to land to eat.

Between May and August is the best time to spot this amazing spider. Chunky, heavyset spider is dark brown in colour (sometimes greenish) with a conspicuous cream/white strip along each side. Air trapped under its body hair makes the spider appear silver under water.
In Ireland it is believed it takes raft spider two years to mature. Courtship must be a frightening experience for the male spider. He cautiously glides across the water. Should he inadvertently trigger the female’s instinctive predatory response he could become her next meal. Up close both spiders bob their bodies up and down in a dance. Mating itself only lasts a few seconds before the male makes a quick exit.

Then, the female spider spins an egg sack, laying several hundred eggs. For about 3 weeks she carries the egg sack about on her back. She dips it frequently into the water to keep the eggs moist. Just before the eggs hatch she spins a nursery web close to the water edge and will protect her spiderlings for about ten days before they disperse to colonize in damp vegetation nearby.