Species of the Week: Scots pine 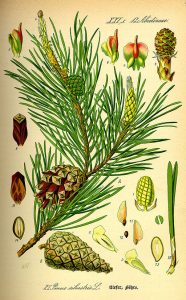 The Scots pine is one of Ireland’s three native coniferous trees. It is found across Eurasia from Ireland to Siberia, it was believed that it had died out in Ireland around 2000 years ago but has since been reintroduced for plantations in the 17th century. Tree stumps have been found in bogs around Ireland dating back 7000 years, with these stumps being used for decretive and artistic pieces. The majority of the trees found in Ireland today are plants brought over from Scotland. Although a study carried out by Trinity College Dublin (McGeever & Mitchell, 2016) found a small selection of trees in Co. Clare that had survived the regional decline and are considered a native collection of the species.

The Scots Pine is a hardy tree that can grow well in poorer marginal soils, it can grow for up to 300 years but some in Scandinavia are believed to be up to 700 years old. It can grow to 30m tall with some found up to 45m in high productivity areas. The needles on the Scots Pine are blue-green, slightly twisted and grow in pairs, which is a useful way to identify the tree.

The cones of the tree are grey-brown and there can be a variety of different ages of cones on any singular tree. Scots Pine is considered a pioneer tree species, meaning it is one of the first tress to grow on abandoned sites making it great for natural regeneration on cutover peatlands.
The Scots pine is very beneficial to nature and is a favourite of the Red Squirrel, they form very important habitats for Irish species in marginal lands. The Scots pine matures relatively faster than similar sized broadleaf native species and creates versatile habitats for wildlife.

Like many evergreen trees there is a lot of mythology associated with the Scots Pine, it was used for the Yuletide log and for burning during winter solstice and was a symbol of rebirth and hope of the new spring and seasons ahead.
In old Irish law (Brehon Law) trees were heavily protected, causing damage to your neighbours trees meant payment back based on the value of tree, the value of a tree was split into four groups:

The severity of an offence to a tree was then based of the value of the tree, Scots pine was part of the lords of the wood “airig fedo” under the name Ochtach these lords of the woods were seen as the most valuable and any damage to these trees required the payment of two cows and a three year old heifer to the land owner. (Kelly, 1999)

Scots pine was a valued resource for making pine resin which was used as pitching for boats and for preserving woods, pine resin can also be used as a glue when mixed with charcoal for arrow tips.

Featured Image by Coilin from Pixabay.