Species of the week: Enchanter’s nightshade 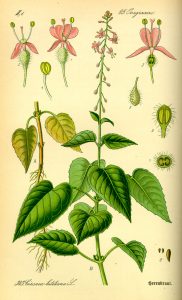 Enchanter’s nightshade is a small plant with long stems and broad leaves, it can grow to 20-50cm or taller and it has small white flowers at the head of each stem. The flowers which are very distinctive as they only have two petals that are deeply cleft, making it look like they have four bloom from May to August. The fruit of the plants has small hooks that get caught in the fur of passing animals and help disperse its. The leaves of the plant are oval, heart shaped with hairs covering the leaves. It grows along shaded roadsides, woods and hedgerows.

The Enchanter’s Nightshade is a favourite plant of the elephant hawk moth caterpillar, a large caterpillar with a bulbous “trunk” that it can enlarge as a means of defence against predators.

The genus Circaea is named after the Greek goddess Circe who was known for her knowledge of potions and herbs. She is said to of used enchanter’s nightshade in her potions to transform Homers crew from the Odyssey to swine.
The plant is not actually related to the nightshade family and is not poisonous but is considered inedible due to the high levels of tannins. It had been used in some cases in a tea as a cure for gout or infections or mixed with ethanol and used as a rub.

Enchanter’s nightshade is said to have enchanting powers and used by witches for attracting or binding people, another name for the plant is the “witch’s grass” and the name Lutetia (Circaea lutetiana) is the Latin for Paris which was once called the “witches city”.