The failure of fisheries science

The failure of fisheries science

In 2013, as part of an overhaul of the Common Fisheries Policy, the European Union committed to ending overfishing by 2015 ‘where possible’ and by 2020 ‘at the latest’. Needless to say, this deadline came and went but a successful legal challenge by Friends of the Irish Environment in the Irish High Court provides a chink of hope that change is coming. The environmental group asked that the legality of continued overfishing be passed to the Court of Justice of the European Union (CJEU) for adjudication and their judgement is expected in the next 18 months or so. A final ruling could force national governments to set fishing quotas in line with what is referred to as ‘maximum sustainable yield’ or MSY.

In its defence, the government maintained that following scientific advice for MSY would mean shutting down entire fisheries, particularly where the advice was for catching zero fish (as it has been for a number of commercially valuable fish populations in recent years, e.g. whiting in the Irish Sea). This is correct but should not be used as an excuse for overfishing. We await the outcome of the CJEU decision eagerly but the court ruling in a way has already succeeded in highlighting the abject failure of the EU and its constituent nations to manage commercial fishing in a way that does not destroy the ocean. In particular, it should ask us to take a look at why MSY has become a benchmark for a ‘sustainable’ way to exploit wildlife when in fact it is nothing of the sort.

The history of ‘sustainable yield’ is rooted in the late 1700s and the development of models of ‘scientific forestry’, and so is a product of the Enlightenment. Originating in Western Europe, its dogma promoted the clearing away of natural ecosystems in favour of monoculture plantations. It relied upon a colonial mindset that allowed Europeans to ignore local knowledge and subsistence forest use in favour of cash crops grown for export. And it has been disastrous nearly everywhere it has been employed from the bogs of Ireland to the hills of India.

The theory of MSY claims that at a certain point in the development of a population a defined volume of extraction can take place without negatively affecting the overall viability of that population. Theoretically, you could continue taking this volume out of the population indefinitely, thereby ensuring ‘sustainability’. The point of MSY was calculated as being roughly half of what the natural population would be. 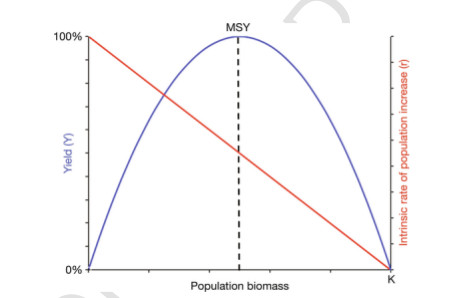 MSY was first applied to the marine environment in the 1930s when industrial exploitation of whales was rapidly expanding[i]. In order to fit into tables and spreadsheets, the biggest creatures to ever live on the planet were reduced to Blue Whale Units where one BWU was equivalent to one blue whale, two fin whales, two and a half humpback whales etc. Equations were devised based upon expected reproduction rates and projected mortality in a way that commodified the animals and rationalised their over-exploitation. That MSY was established not to conserve a species but to remorselessly exploit it can be seen in the fate of the blue whale: from a pre-whaling population of 250,000 by the 1960s it was on the brink of extinction and remains an endangered species today.

MSY theory has long been subject to criticisms but two particularly stand out. Firstly, the model overly simplifies complex ecosystems. Fish (or whales or trees) do not live in isolated units – they are subject to myriad physical and biological interactions, the full understanding of which are probably beyond human abilities. MSY tries its best to ignore this.

Secondly, the only way of finding MSY for a species is to overfish it. In the absence of reliable data on what a natural population of any given fish looks like, the idea was to exploit it until the edge of collapse (or even tip it over the edge); then you would know that you have passed the point of MSY and could at least then hope to take corrective action. The application of MSY also assumes that nations that regulate fishing will actually take corrective action once the safe limit has been passed and this hardly ever happens. In fact, it has been claimed that none of the assumptions upon which MSY is based have been found to be correct.

MSY officially made its way into fisheries management in the post-WWII period when the United States was eager to consolidate its power and influence in the Pacific Ocean. In a paper written for the Journal of the International Council for the Exploration of the Seas (ICES) in 2013 Carmel Finley and Naomi Oreskes[ii] argued that the Western powers, and the US in particular, were determined to ensure freedom of movement in the ocean for their navies or whatever other use they may have seen fit. Expanding fishing fleets in the pretence that it was feeding the poor was a useful cover and MSY was needed as a veil of responsible management. In 1949, the ‘US Policy on High Seas Fisheries’ was developed, tellingly, by the State Department (and not the department of fisheries) and, according to Finley & Oreskes:

The solitary graph presented to explain MSY had no numerical scale on its axes; it was a theoretical construction with no quantitative dimension. It was, quite simply, an idea, a proposal of how the world might work, but with no evidence to show that this was how it actually did work.

Thereafter, the science scrambled to fit the policy. In 1954 the UN convened a meeting at the behest of the US which was to ensure that nation states could exploit the sea to their hearts content until reaching the point of biological collapse, i.e. MSY. For a country where a foreign fleet was exploiting fish in its seas (as the US was doing in Latin America) the burden of proof to demonstrate overexploitation was on that country. Since only the US and Europe had at that time the scientific tools to assess fish stocks, it ensured that these countries could pillage the world’s oceans without constraint (this was in a time before Exclusive Economic Zones which today stretch 200 nautical miles from a nation’s coast; in those days national jurisdiction only extended to 3nm). The science thereafter formed around the policies and laws – rather than the other way around. Or, as Finley & Oreskes put it: “MSY was a policy camouflaged as science”.

Today MSY is the centre-piece of fisheries management across the globe. In the North-East Atlantic about 15% of ‘fish stocks’ remain outside of MSY, 37% are ‘unknown’ while nearly half are within MSY, which the fisheries scientists will tell you signifies ‘sustainable’ management. However this is far from the case. In fact, there is no fishery around the Irish coast which could be described as ‘sustainable’, i.e. well managed, supervised and where negative ecological impacts are reduced to acceptable levels.

The third of fish stocks that are ‘unknown’ will never be ‘known’ because these are typically commercially low value and investing in the data to fully assess them is not worth the effort. A fishing method might be terribly destructive, or result in unacceptable levels of bycatch, sometimes of species that are rare or protected, but yet we will still be told that because the target species is at MSY, then the fishery is perfectly ‘sustainable’. Fiddling with fishing gear, e.g. to make the holes in the nets bigger is touted as a way of achieving MSY but this ignores the importance of larger, older fish in a population (these fish typically produce far greater spawn than younger, smaller fish). It is as if a forest manger proudly proclaimed to be sustainable even though every single large tree were felled for timber (although, that also happens).

When you realise that MSY is not a tool for conservation but rather for over-exploitation then the whole system starts to make sense. The alternative would be to recognise that fish are wild creatures with their own intrinsic value and are part of complex webs of life which too have value. Unfortunately, the Common Fisheries Policy was never designed to recognise these values.