The senseless logic of burning land

The senseless logic of burning land

Let’s say for a moment that I’m a farmer in the uplands and I want to clear land for my grazing animals. I’ve been told by all the farmer organisations that fire is a perfectly acceptable tool for the task and I may even have heard that it’s beneficial for wildlife and vegetation, but I’m also aware that burning between March and August is illegal under the Wildlife Act. So I want to do this by the book. Where to start? 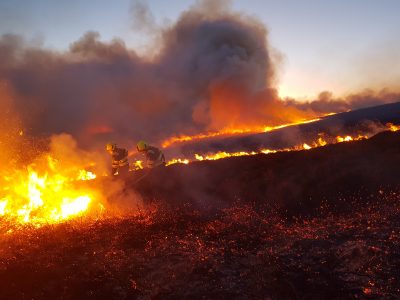 I go to the Department of Agriculture’s website and I put ‘burning’ into their search engine. This brings up three results: two warnings not to burn during the nesting season (one from 2019 and one from 2021) and a link to a consultation on draft guidelines for burning of vegetation in March, something that closed in January 2019. Ok, so nothing there, but I have lead. So, I Google ‘guidelines for burning of vegetation in March’. This reveals some links to the consultation, which were held after the Heritage Bill debacle, but nothing to indicate that these guidelines were actually finalised so I remain none the wiser.

Next, I try Teagasc, the farm advisory body. Better luck this time, I find a document called ‘Prescribed Burning – Code of Practice’. It’s 42 pages long. Alright, not too long I think, so I make myself a cup of tea and sit down to read them. I’m told early on that “with the right application fire can enable rapid and cost effective treatment of unwanted vegetation” but also that “poorly planned or executed burning will cause long-term damage to soil and upland hydrology or hasten unwanted vegetation change that will in turn reduce productivity in livestock or wildlife habitats” as well as placing human life and property at risk. The guidelines stress the burning should only be carried out by skilled and experienced personnel but these people are thin on the ground as this type of prescribed burning has no tradition or history in Ireland.

It also asks me if burning is really necessary, highlighting that grazing regimes and mechanical means of vegetation clearance can be alternatives, but my flock of sheep are already on the hill and I’m not familiar with the kind of machinery being referred to, in any case the Irish Natura and Hill Farmers Association have said that burning is an “essential part of upland management”.

I press on. Section 1.3: Be aware of the law. “Several legal constraints apply to controlled burning and individuals planning to burn must be aware of these to avoid the risk of prosecution and/or penalties under the Department’s Support Payments for Farmers (e.g. Single Payment, Disadvantaged Areas)”. The last bit is in bold and underlined, and I’m keen to be law abiding, so I’m really paying attention for this bit.

“Specific legal measures that affect the use of fire for land management are contained within the following relevant legislation:

In addition to penalties arising from breaches of the above legislation, Local Authorities may impose a charge on the owners of property, or the beneficial occupiers of the property, in relation to fire service costs, where Fire and Rescue Services have to be called to deal with a fire.” 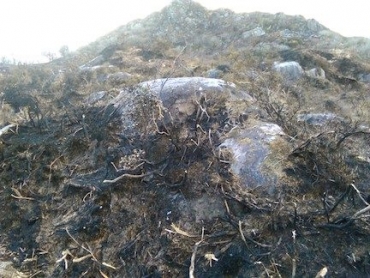 Burning is a failure of land management

I’m also warned that any breach of the above regulations would constitute illegal burning which will threaten my single farm payment. I am an average sheep farmer and my income is only €14,780 a year while my payment from the taxpayer is substantially more than what I’m actually earning [i] so were I to lose this, I’d lose more than my entire income. I’m starting to have doubts.

I also read that I should have a written burning plan as well as extensive consultation with neighbours and other ‘stakeholders’. I’m told that if I live within one mile of a forest that I do not own I must notify the Garda station giving seven days’ notice and if I’m in a Special Area of Conservation or Special Protection Area I must contact the National Parks and Wildlife Service (NPWS) and obtain a ‘notifiable action authorisation’. I have no idea what the weather is going to be like in seven days or if it will be dry enough, or calm enough, for burning. I’m starting to think I need something stronger than tea, and I’m only on page 9.

This hypothetical scenario may go some way to explaining why ‘controlled burning’ or ‘prescribed burning’ really doesn’t happen in Ireland. The IWT did a Freedom of Information (FoI) request last month to ask how many ‘notifiable action authorisations’ were issued by the NPWS in 2020. It turns out there were zero in the Eastern, Southern and Northern divisions. There were two in the Western division, one of which was on coastal grassland’ (we haven’t got our hands on the other one due to Covid restrictions).

Following a spate of out-of-control fires in Kerry and Wicklow in February last, Wicklow TD Jennifer Whitmore asked the Minister for Agriculture, Charlie McConalogue, if “farmers who have burned land during January and February 2021 without the necessary controls and permissions in place will have their single farm payment reduced”. The answer: “My Department investigates incidents of illegal burning using the most up to date technology and satellite imagery.  Where such investigations identify land that has been illegally burned, such land is deemed to be ineligible for payment under the BPS [Basic Payment Scheme]”. This reads to me like they don’t know whether out-of-control = illegal. We’ve put in another FOI in an effort to get clarity.

Where groups have tried to burn within the rules and within the permitted season they have found that the weather and the availability of trained personnel has limited their plans.*

All of this shows how there is virtually no such thing as ‘controlled’ or ‘prescribed’ burning in Ireland. Leaving aside the disastrous environmental impacts of fires on peatlands, it is no longer tenable for farming groups to claim that fire is ‘essential’, desirable or even feasible.

Burning of land, whether it’s controlled or otherwise, is a failure of land management and is largely a product of putting sheep at the centre of upland farming models. If we remove the sheep from the equation we can see a whole new spectrum of possibilities opening up, from rewilding of upland woodlands and bogs, to nature-friendly grazing with small cattle on drier areas for those who want to continue farming. But there is no policy to support this.

With increasing focus on the potential of peatlands for storing carbon, as well as new polices on farming and forestry on the near horizon, this policy black hole is crying out to be filled.

*This article has been updated because the original said that no planned burning had been carried out by the SUAS farming group in Co. Wicklow and that was incorrect, sorry.

Tweet
Share
Pin
0 Shares
Previous Post Chapter 7: Pearl Valleys Farmland Next Post Press Release: Irish Wildlife Trust finds that no permits for ‘controlled burning’ were issued in the North, East or South of Ireland in 2020, and only two in the West