Water… what’s it to you?

Where is your nearest water course? Mine is the River Tolka, a fairly short river that rises in farmland in Co. Meath only about 20km from where I live in Dublin. It is perhaps best known as the river that flows past the National Botanic Gardens in Glasnevin while its estuary along the Clontarf Road is familiar to those using the broad cycle and walkway that looks out onto the mudflats and the office blocks at Eastpoint.

Growing up, the banks of the Tolka were fairly sketchy places but in recent years I have rediscovered the stretch within walking distance of my home as it is a wonderfully wild and disordered place. The woodlands near the Blanchardstown Hospital are considered ‘long established’ while just east of the M50 the river flows out onto a floodplain with magnificent specimens of crack willow. There are few places anywhere in Ireland where nature is allowed to just do its thing and I feel lucky that I have somewhere like this to enjoy. Along ‘my’ short length of the Tolka I can hope for a sighting of a kingfisher and a place to watch the water spill by with surprisingly little intrusion from the outside world.

My mother grew up on the north side of the valley, at Finglas, and my uncles today reminisce about mitching from school to swim in the river. This is not something that would be advisable today. The River Tolka throughout its length, from its sources in the pastures of Meath to the hardened walls of its outfall at Eastpoint, is polluted. I have only ever known it in its polluted state. To much excitement, there were salmon found in 2011 but these haven’t been recorded since and according to Inland Fisheries Ireland most of their monitoring sites were ‘poor’ in terms of fish in 2017. A few brown trout and the odd eel and lamprey.

The Environmental Protection Agency is the state body that is charged with monitoring the status of our water bodies, that is, the rivers, lakes, estuaries, coastal seas and groundwaters. The most recent information on the River Tolka, which divides the river into two ‘sub-catchments’, tells me that the sub-catchment from Blanchardstown to the estuary (the urban bit) is mostly polluted due to ‘combined sewer overflows’ (this is where sewers become overwhelmed during heavy rain and send raw sewage to the river) and ‘diffuse sources of run-off’ (this could be runoff from expanses of hard surfaces but also misconnections, where the pipe from toilets and showers in houses should have gone to a sewer but actually just went to the river).

The River Tolka – wild in places, but polluted throughout

Upstream of Blanchardstown, the mostly rural bit, is polluted because of farmyard runoff, septic tanks, and diffuse run-off from farmland (e.g. slurry or other nutrients). There are also industrial discharges. At the Tolka Estuary, the accumulated pollution from the river meets the outfall from the Ringsend wastewater treatment plant, which, despite on-going upgrade works, has never been compliant with emission limit standards. The estuary sediments, enriched with nutrients, are nevertheless important for wintering birds which feed on the snails and other abundant invertebrate life and is a Special Protection Area. It’s the only part of the Tolka that enjoys legal protection as a nature conservation area.

Much of the urban portion of the Tolka provides high value amenity and there are broad parklands in the newer suburban sections. The older bits, such as Glasnevin, have long been impounded with concrete walls, weirs and buildings right to its edges. But despite its value for nature and human health the river, including flood storage in ‘my’ wild area, it is effectively an open sewer for human and animal waste throughout the catchment. Part of the reason why we accept this neglect is down to a wide acceptance of pollution among the general public as somehow normal. But there is more to it than that.

22 years ago, The European Union adopted a landmark piece of legislation – the Water Framework Directive – that declared that by 2015, all of the waters of the member states would be at ‘good status’. There could be exceptions of course, but only for extenuating circumstances.

At the time, it must have seemed like this was plenty of time. The Irish government, like other countries, was to assess the status of water bodies then come up with a ‘programme of measures’ to restore those that were not at ‘good status’. In addition, there was to be no backsliding, so that water bodies already at ‘high’ or ‘good status’ should not be permitted to deteriorate.

But this is not what happened. The latest national assessment shows that roughly half of our water bodies are not reaching ‘good status’ while the number of ‘high status’ (pristine) water bodies has fallen off a cliff, from over 500 in the 1980s to a paltry 20 in 2018. What’s worse, following some initial signs of improvement, water quality is severely deteriorating in the parts of the country that have been affected by dairy expansion since dairy quotas were lifted in 2015.

We are still pumping raw sewage into our surroundings, in breach of EU law. The EPA says that a third of the 34 sources of raw sewage are unlikely to be addressed by 2024. We also know that the destruction of rivers through ‘physical modifications’, typically drainage programmes that remove riparian vegetation and drastically alter how rivers function, is worsening. 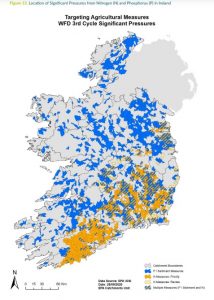 Pressures from agriculture from phosphate (blue) and nitrate (orange)

Not only are we failing to comply with the Water Framework Directive, but another EU law supposed to protect water quality, the Nitrates Directive, was adopted way back in 1991 to limit the volume of nutrients escaping to rivers and lakes from farmland. A derogation from nutrient limits is needed by dairy farmers in order to maintain productivity, but other measures which are supposed to offset the need for these limits have utterly failed to even stop the decline in water quality. 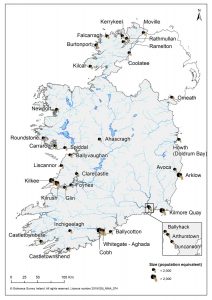 Locations were raw sewage is discharging to the environment

It would be wrong to say nothing is being done to address the dire state of our water bodies. Near where I live, a major investment has been made in redirecting ‘misconnections’ and so a major source of pollution will be stopped. There is a limited farm advisory programme that is part funded by the dairy industry and this is showing early signs of success. However, these are bitty initiatives when much more radical action is needed. Despite these measures, the entire Tolka water system remains officially ‘at risk’ of not achieving ‘good status’.

In 2018, during the last round of the Water Framework Directive plans, the Tolka was identified as a ‘priority area’ (one of 190) and we were assured that there would be a thorough analysis of pollution sources and a plan to address them by 2021. But the plan never materialised.

Agriculture, such an on-going source of contention across the spectrum of environmental pressures is coming under greater scrutiny but measures remain fragmented. An analysis of new measures under the Nitrates Action Plan (which is supposed to ensure compliance with the Nitrates Directive) will see tighter rules for those farmers availing of the derogation. But compliance is a major issue.

The Department of Agriculture has claimed that 40% of dairy farmers do not have adequate storage for slurry while a major issue has been renting land away from the farm in order to dilute the figures (i.e. making it look like there are fewer animals per hectare – a clear abuse of the system). Minister for Agriculture Charlie McConalogue, in approving the latest Nitrates Plan, has promised tighter inspections. Piecemeal rules, frequently with no scientific backing or with a broad-brush approach, don’t help.

Water is such an essential part of our lives. During the pandemic I spent more time than usual along the River Tolka – this small forgotten stretch helped me through the lockdowns. But it remains much abused and without a step change in how we value these places it is hard to imagine it as the clean, nature-rich place it could be.

The latest River Basin Management Plan is open for public consultation until the end of March. It is a good chance to let the government know how you feel about your local water body. The Sustainable Water Network (SWAN – an umbrella body of which IWT is a member) has all the instructions you need to make a submission. Click here.

The easiest way to find out the state of your local water body is through the www.catchments.ie website – Click here for the map .