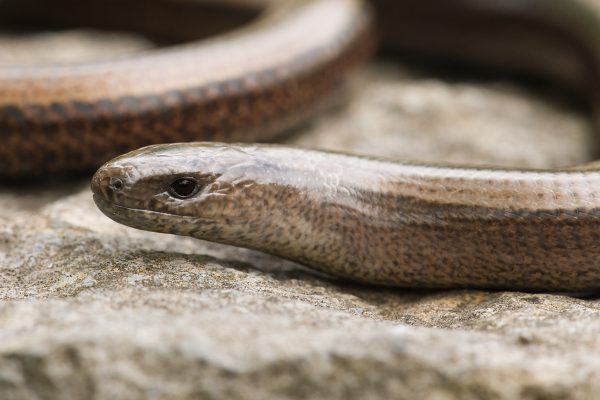 Whoops, looks like Saint Patrick is slacking on the job! Or is he? Despite its scientific name meaning ‘fragile snake’, this slithery little reptile is actually a kind of legless lizard, called a slow worm (Anguis fragilis).

You might be wondering what the difference between a legless lizard and a snake is, but you’d be surprised at just how different they can be. Snakes don’t have any eyelids, so they can’t close their eyes or blink, but lizards can. Lizards have visible ear holes on the sides of their heads, while snakes don’t (although snakes can still hear). The structure of their jaw bones and the ways their scales are arranged are different too.

But perhaps most strikingly, lizards have one party trick that snakes don’t, which gives the slow worm its scientific name. When grabbed by a predator, lizards can drop the end of their tail and leave it behind in a process called ‘autotomy’. While the lizard scurries off to live another day and grow a new tail over time, the wriggling end stays behind as a distraction. In the slow worm’s case, the tail makes up almost half of its body length, so you can imagine the surprise of people in the past who picked them up only for them to suddenly appear to break in half.

Slow worms are a rare sight in Ireland. They aren’t a native species. It is thought that they were introduced from Britain at some point in the 1900s. They almost exclusively inhabit County Clare, in and around the Burren, although they’ve been spotted in Galway too.

Unlike our other species of reptile, the viviparous lizard, slow worms don’t bask on rocks to warm up. They much prefer to hide underneath objects that have been warmed up by the sun, and spend most of their lives half-buried as they burrow around looking for the worms and slugs they like to eat. This fossorial (burrowing) lifestyle is probably why they lost their limbs.

Their secretive lifestyle and scarcity make them difficult to study in Ireland, and you aren’t likely to see them unless you go out looking for them. Although they’re non-native, they aren’t considered to be an invasive species as they don’t appear to be having any negative impacts on the ecosystem and have a restricted range which is expanding very slowly, if at all.

In their native range in Britain and mainland Europe, slow worms are a common sight in gardens, where they’re often found living in compost heaps or under flat pieces of wood and plastic. They hunt garden pests, especially their favourite food, slugs. Unfortunately, their biggest predator is the domestic cat, who can easily chase them down and kill them.

In Ireland, people living in the right part of the country can set out flat boards of tin or roofing felt, and if you’re lucky, a slow worm will move in. They primarily hunt at night, and they’re very shy animals, so even if they live in your garden, you aren’t likely to spot them by chance. Slow worms don’t tend to roam very far, so the same individual might live in your garden for years if it decides it likes the place.

Like the viviparous lizard, slow worms hibernate from October to March when the weather is cold and there are fewer invertebrates for them to eat. They mate at the end of spring or early in the summer, when males wrestle each other for access to the females. There are more females than males, and females and males will both mate with many partners before the season is up.

Slow worms are ovoviviparous, which means that rather than laying their eggs in a nest to incubate, the females incubate the developed eggs within their bodies, then give birth to live young once they ‘hatch’. The babies are born at the end of summer, and are a bright gold colour in contrast to the brown of the adults. These tiny little worms spend their first few months of life eating everything they can catch in preparation for their first hibernation.

If the baby slow worms are lucky, they’ll survive to adulthood, and live a very long life indeed. In fact, the slow worm is thought to be the longest-lived species of lizard in the world. They can live for over 30 years in the wild, and one captive male living in a zoo lived to be at least 54!

Since the slow worm is so rarely seen in Ireland, it’s hard to know exactly what kind of impact they could be having on our wildlife. At the moment, though, they seem to be harmless, and they certainly are a unique kind of animal. Sightings of slow worms can be reported to Biodiversity Ireland to help document their range.