It has long been argued that one of the reasons for our biodiversity crisis is the failure of economics to account for environmental harm. The effects of habitat destruction or pollution from industrial effluent has been dismissed as an ‘externality’ as though the air we breath and the water we drink is somehow not necessary for a functioning economy.

This gaping hole in the study of economics has been acknowledged for many years and, in an effort to plug the gap, a number of ecological economists have promoted the idea of ‘natural capital’.

All of the stuff that is produced by the economy, from roads to laptop computers is the ‘produced capital’ while the labour and ingenuity of people is the ‘human capital’; both have long been integrated into economic models. ‘Natural capital’ on the other hand, remains ‘external’.

The idea of ‘natural capital’ makes many nature-lovers queasy.

This has partly come from the impression that it is attempting to put a price on nature and certainly the language that is used (forests and wetlands are ‘stocks’, birds and fish are ‘assets’ etc.) seems to confirm this. The Irish Forum for Natural Capital defines the term as “an economic metaphor for nature; a concept that frames the world’s resources like plants, animals, water, and minerals as assets or stocks that yield a flow of benefits to people.” 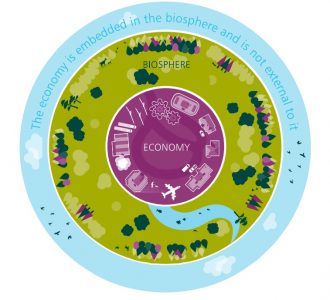 From the Economics of Biodiversity: the Dasgupta Review

It has always seemed to me like a clumsy way to make the natural world fit into to our financially-driven mindset, when we should really be striving for the reverse. Enthusiasts say that if nature doesn’t appear on balance sheets and cost-benefit analyses then it will be ignored. But the underlying assumption here is that those making decisions are rational bean-counters and that bankers and ministers for finance will stop destroying nature when presented with the numbers.

The Office for National Statistics in the UK, which has been drawing up natural capital accounts for a number of years, has stated that the “partial asset value of UK natural capital” in 2016 was close to one trillion pounds. This has not stopped the destruction of ancient woodlands to make way for the HS2 highspeed railway line which will link London to the North of England.

Nevertheless, economics is important. It would be crazy for even the most ardent proponents of nature’s intrinsic value to suggest it does not have a role to play in solving to the ecological crisis.

Earlier this month, at the request of the UK government, the Indian-British economist Partha Dasgupta published ‘The Economics of Biodiversity’ or, as it has been more commonly referred to: The Dasgupta Review. The main report is over 600 pages long so my blog readers will forgive me if I confined my reading to the 100-page ‘abridged version’ (a 10-page ‘headline messages’ is also available).

Unlike the Stern Review, which was published in 2005 and was a landmark report on the economics of climate change, the Dasgupta Review does not attempt to put a cost to the economy on the loss of biodiversity. Nor does it attempt to put a price on nature. What it does do is identify some of the market failures which have led to humanity teetering on the brink of a global ecosystem collapse.

Some of the ideas will already be familiar. The use of Gross Domestic Product (GDP) as the single measure of how we’re doing as a nation is “based on a faulty application of economics”. A nation can record ‘healthy’ growth in GDP while destroying nature (“eroding natural assets” is the term used) and that is exactly what has been happening as we celebrate the notional idea of ‘economic growth’, particularly since the 1950s. 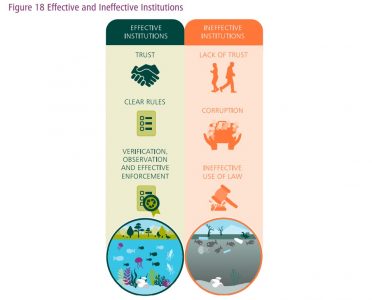 The Review states that “the macroeconomic theories of growth and development that have shaped our beliefs about economic possibilities and the progress and regress of nations do not recognise humanity’s dependence on Nature” – something that is hardly a controversial idea, but one which is nevertheless entirely absent from mainstream economic thinking.

It logically follows that since we only have one Earth, the degree to which humanity can appropriate nature’s bounty is “bounded”. This idea was forcefully advanced way back in 1972 with the seminal publication by the Club of Rome entitled (not obscurely) The Limits to Growth.

The Limits to Growth was laughed at at the time and even today many people blithely assume that human ingenuity (i.e. technology) will ride to the rescue. But Dasgupta confirms the Club of Rome’s conclusions through calculations taking into consideration a growing world population and the stated aim of meeting the UN’s Sustainable Development Goals (SDGs; ending poverty, inequality, providing education, clean drinking water etc.) by 2030.

Increases in “efficiency alone are highly unlikely to be able to close the gap” and “no matter how ingenious we can be, global output must also be bounded”. There is no substitute for setting hard limits to our actions such as greenhouse gas emissions or protecting areas from exploitation.

The financial argument kicks in when highlighting the colossal subsides doled out by governments and which are harmful to biodiversity, somewhere between 4-6 trillion dollars when environmental damage is taken into account and a figure which dwarfs the sums spent on nature conservation. (A report this week showed how subsidies to the fossil fuel industry in Ireland increased in 2018 to €2.4 billion).

Despite the jarring language around ‘natural capital’ many of the solutions are widely supported, particularly ‘payments for ecosystem services’ and which are already deployed throughout the world, including here in Ireland.

Consumer products are “under-priced” providing “people with an incentive to consume not only too much, but also consume the ecologically wrong sorts of goods”. Irish farming groups are increasingly highlighting how food is too cheap while so much of our food (up to a third) is wasted. However, with nearly 70% of all agricultural land given over to animal-based food production, the ecological cost of lamb, beef and dairy means this sector must be drastically scaled down.

Perhaps the most interesting thing about the Dasgupta Review is that he does not believe that fixing what he describes as the “institutional failure” of states and markets will, on its own, solve the problem.

Yes, we need new metrics for measuring well-being; not just wealth but “inclusive wealth”. He also notes that the current mindset has been allowed to develop due to an increasing detachment between ordinary citizens and the natural world. “Such detachment is in part a symptom of societal change, including growing urbanisation, the profusion of technology, and reduced access to green spaces. Detachment from Nature has meant a loss in our physical and emotional state.”

The remedy to this is education, and lots of it. “Establishing the natural world within educational policy would contribute to countering the shifting baseline, whereby we progressively redefine ourselves as inhabitants of an emptying world and believe that what we see is how it is and how it will continue to be. This shifting baseline has been termed the ‘extinction of experience’”.

There is also room for “an awareness of the sacred to encompass a sense of awe and wonder, of a way to become aware of the transcendent. […] Biodiversity does not only have instrumental value, it also has intrinsic worth – perhaps even moral worth. Each of these senses is enriched when we recognise that we are embedded in Nature. To detach Nature from economic reasoning is to imply that we consider ourselves to be external to Nature. The fault is not in economics; it lies in the way we have chosen to practise it.”

Irish media normally devotes plenty of space and airtime to the views of our economists – I wonder how many of them will read the Dasgupta Review.

In the latest episode of Shaping New Mountains I looked at how a shift in our values is what’s really needed to break the logjam in the ecological crisis.