Hardly a week goes by without articles appearing in the farming press about the dire state of the forestry industry in Ireland. These articles are repetitive (typically reprints of industry press releases) and bemoan the difficultly in getting licences for routine operations. These rarely, if ever, mention that forestry has been a rogue industry in terms of compliance with environmental law (see here for more background).

These stories also tend to defend the status quo, suggesting that some kind of ‘return to normal’ is needed when in reality a total transformation of the sector is required. While environmental NGOs have long-held views on what such a transformation looks like, this summer a new EU Forestry Strategy for 2030 has spelled it out. It comes at an interesting time for Ireland, as Minister Pippa Hackett’s ‘Project Woodland’ lumbers on. Any new Irish strategy will presumably have to be consistent with that of the EU and, even if it isn’t, it has validated what many in the eNGO sector and beyond have been saying for some time, particularly in relation to monoculture plantations and clear-fell harvesting. 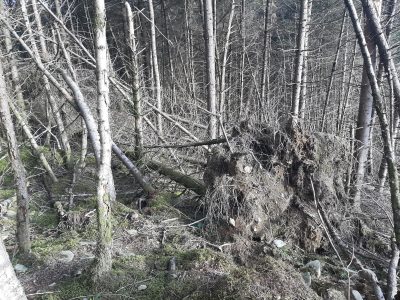 out with the old…

So what are the main objectives of the EU Strategy? First and foremost it acknowledges that future forests must be multi-functional and climate resilient. It says that “we will need larger, healthier and more diverse forests than we have today, notably for carbon storage and sequestration, reduction of the effects of air pollution on human health and halting loss of habitats and species” adding that this is “a precondition [my emphasis] for forests to be able to provide livelihoods and deliver on their socio-economic functions for decades to come”. Indeed a recent study on the state of forests in Europe noted that the “condition of European forests is deteriorating” with disturbance impacts from droughts, fires, and pests increasing (despite the forest area also increasing in recent decades).

A key target is “protecting, restoring and enlarging EU’s forests to combat climate change, reverse biodiversity loss and ensure resilient and multifunctional forest ecosystems”. It states that “In light of climate change and biodiversity loss there is an urgent need for adaptive forest restoration and ecosystem-based management approaches that strengthen the resilience of EU forests” adding that “very few forests will either not be strongly affected by climate change, or will not require immediate management action to reduce their vulnerability to climate change”.

There is a strong emphasis on protecting primary and old-growth forests stating that all such forests “will have to be strictly protected” in line with the EU Biodiversity Strategy (which aims to ‘strictly protect’ 10% of EU land area by 2030). It says there is an “an immediate need to map the primary and old-growth forests and establish their protection regime”, something of particular relevance in Ireland where many patches of old native woodland are not identified or covered by conservation legislation (and even when they are they are falling to bits). The EU believes that “Member States should urgently engage in completing the mapping and monitoring of these forests, and ensuring no deterioration until they start to apply the protection regime” and proposes a common definition for primary and old growth forests by the end of 2021.

Ireland is an outlier by European standards not only by the low level of overall tree-cover, but by the dominance here of non-native, single-species stands. We should use this exercise in identifying existing old, native woodlands as a basis for expanding and joining them up so that we are restoring the national forest ecosystem. This is a separate task to addressing issues in commercial forestry (though it can be complementary) and new land use planning should identify areas for ecosystem recovery with little or no commercial extraction.

But what about rebuilding the commercial forestry sector? While the industry paints a sob story in its effort to ‘return to normal’, it’s not so downbeat in its communications with investors. One brochure proclaims that it is a sector that is “growing fast” and that “the supply of wood from Irish forests will double by 2035” as trees planted in the 1980s come to felling age. As these crops are removed the question then becomes, what should replace them? 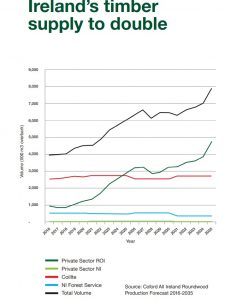 The EU Strategy says that “all forests should be increasingly managed so that they are sufficiently biodiverse” adding that:

There are significant opportunities for win-win measures, which simultaneously improve forest productivity, timber production, biodiversity, carbon sink function, healthy soil properties and climate resilience. A greater diversity of forest ecosystems and species, and the use of well adapted genetic resources and ecosystem-based approaches to forest management can enhance long‐ term adaptability and forests’ capacity to recover and self-organise.

In addition, certain management practices that support biodiversity and resilience, are essential in this context, such as the creation or maintenance at stand and landscape level of genetically and functionally diverse, mixed‐ species forests, especially with more broadleaves and deciduous trees and with species with different biotic and abiotic sensitivities and recovery mechanisms following disturbances, instead of monocultural plantations. Also, management practices like uneven-aged and continuous-cover forestry, sufficient quantities of deadwood, regulation of wildlife densities and the establishment of protected habitat patches or set aside areas in production forests help ensure long-term environmental and socio-economic viability of forests.

The strategy is unequivocal that clear-felling “should be used only in duly justified cases” and that “carrying out logging during bird-nesting period must comply with the Birds Directive”. The document also promised a crackdown on non-compliance by EU Member States that are disregarding environmental laws. 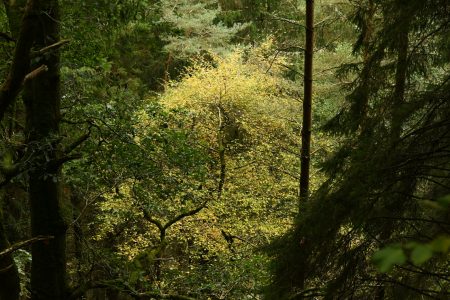 …in with the old

Forestry in Ireland has an acute problem with licencing because it has been operating outside these laws. That is being addressed by Minister Hackett and her team in the Department of Agriculture, Food and the Marine. The medium term (up to 2035) however will see healthy returns for the industry judging by their own projections. Now is therefore the perfect time to radically transform new planting and the long-term future of Ireland’s forests. Tree nurseries will adapt quickly no doubt, even if natural regeneration plays a dominant role in forest expansion. Sawmills will need to retire assets that are designed for only a narrow range of products but they have 15 years in which to do so. A new commercial forestry model must be based upon diversity, protecting soil, water and biodiversity and leaving behind the blocks of monocultures and clear-felling that have caused so much harm. This has been said by many for years but the newly minted EU Forestry Policy paints it in big letters.