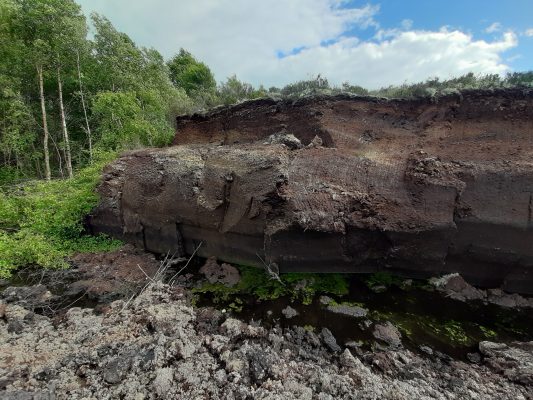 Data from the Department of Culture, Heritage and the Gaeltacht (DCHG), and acquired by the Irish Wildlife Trust under Access to Information on the Environment rules, shows that mechanical turf-cutting continues to be a widespread issue on Special Areas of Conservation (SACs) in Ireland despite the practice being unlawful since 2011.

Under the EU’s Habitats Directive, 57 sites have been designated as SACs specifically for their raised bog habitat. This is one of the rarest habitats in the world; in Ireland the extent of ‘active’ raised bog (i.e. where wet peat was still growing) was mostly recently calculated at 0.6% of its original extent. However, this figure is now likely to be significantly smaller. The details sent to the IWT (and reproduced below) show that of the 57 SACs, turf-cutting was monitored by the National Parks and Wildlife Service (NPWS) at half of the sites (28 SACs) since 2016.

In a statement sent to the IWT by DCHG, “in accordance with the Wildlife (Amendment) Act 2000 and the European Communities (Birds and Natural Habitats) Regulations 2011, turf cutting may not take place on raised bog SACs or NHAs [Natural Heritage Areas] unless with the prior consent of the Minister of Culture, Heritage and the Gaeltacht or of another public authority, if applicable”. It seems that this regulation is widely ignored.

Turf-cutting took place at 16 SACs in 2020. Mouds Bog SAC in Co. Kildare as well as 13 others (including Barroughter Bog SAC in Galway, Callow Bog SAC in Roscommon and Coolrain Bog SAC in Laois) have been cut every year since 2016 (as far back as the requested figures went).

Peatlands in Ireland are not only unique habitats for rare species but play an important role in storing carbon and in regulating flood water run-off. They are a significant part of our heritage and are frequently important amenity sites. However, when peatlands are damaged through drainage, turf-cutting, animal grazing or forestry, these processes go into reverse. It is particularly distressing therefore so see that even in the small number of ‘protected areas’ peatlands continue to be lost under the noses of the authorities.

IWT campaigns officer Pádraic Fogarty says “The battle to save the bogs has been traumatic for many involved but we at least thought that issues had been resolved with the prohibition on turf-cutting in raised bog SACs and the publication of the National Peatlands Strategy. Now we learn that these have been meaningless exercises and that we’re continuing to lose even these tiny fragments.

It’s bizarre that at a time when EU funding is going to actively block drains on 12 raised bog SACs (see www.raisedbog.ie), and that government spending is being directed toward rewetting worked-out bogs, that elsewhere authorities are turning a blind eye to the use of heavy machinery cutting the bogs away. So far, we’ve been doing a spectacular job of monitoring the disappearance of nature in Ireland.”

The IWT has sent our findings to Ministers Darragh O’Brien and Malcolm Noonan (in whose department the NPWS now lies) as well as the European Commission. In July, the EC referred Ireland to the European Court of Justice for failing to protect SACS and for failing to implement management measures at any of the 423 SACs in the state. 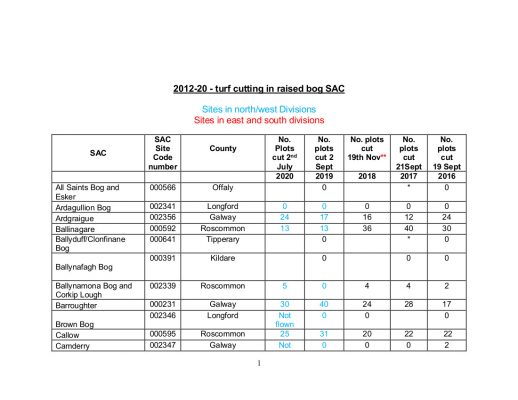 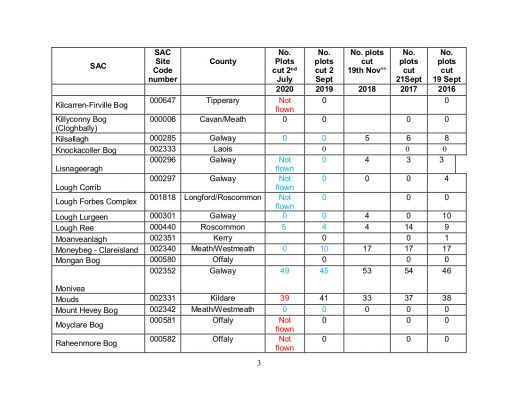