Seaspiracy and saying no to seafood

Seaspiracy and saying no to seafood

I remember, over a decade ago, kick starting the Irish Wildlife Trust campaign to end overfishing which was, in turn, part of a wider campaign called OCEAN2012. This was in advance of the reform of the EU’s Common Fisheries Policy (CFP) and I was trying to get my head around how this related to Ireland and the fish that are commonly eaten here. There was a discussion about whether we should ask people to stop eating seafood altogether, but we decided against this on a number of grounds.

Firstly, while it is a simple message, it throws a blanket over the enormous complexities in fishing. This includes the history, heritage and socio-economic place of fishing in our country, as well as the enormous inequalities which exist in the sector. There’s a big difference between the fishing of a supertrawler, which can be over 100 metres in length, and the much smaller boats, which make up the bulk of the Irish fishing fleet, and which are mostly using low-impact pots to catch crustaceans. Secondly, we decided that we were not in the business of telling people what to eat.

Having said that, we could give people the information about the fish being eaten so they could avoid those with the most damaging footprint and eat the ‘sustainable’ species, should they so wish to.

So, we set about creating a consumer guide for our website, based on a traffic light system which would tell people a little bit about the creature they were tucking in to, where it came from, how it was caught, and any ecological impacts the fishery was having. It was based on a system in use by the Marine Conservation Society in the UK as well as the Monterey Bay Aquarium in the US. Our guide was accompanied by a gorgeous set of drawings by a student at the Burren Art School, Chelsea MacClanahan. We even got support to print up a wallet-sized version in the hope that people would whip it out when ordering at restaurants. 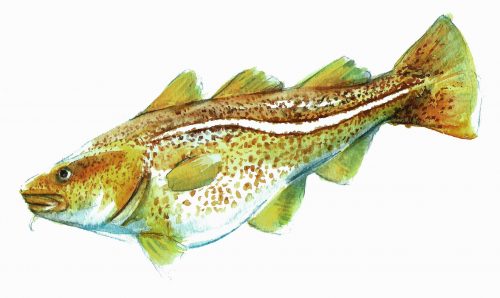 Cod – a species that been in the red for decades (c. Chelsea MacClanahan)

I’d have to admit now that the approach was not effective. I remember trying to get support from restauranteurs, particularly the Restaurants Association of Ireland, but there was no interest. We were also encouraging people to ask restaurant staff where their seafood came from (there was a similar – state-supported – campaign at the time to get people to ‘just ask’ about the origins of their beef).

But this seems now to be equally unrealistic. At a Dublin eatery, a few years into our campaign, I asked the waiter where the halibut on the menu came from and, after looking at me blankly for a moment, the reply was: ‘the sea?’

If the industry doesn’t want us to know, and the restaurant trade is keen to just offer what people want, it’s hardly right to expect the floor staff to know the difference between gill net caught hake and bottom-trawled sole.

The other issue with our traffic light system was that practically everything was red or orange. The Marine Stewardship Council (MSC) withdrew its label for mackerel at one point (which had been on our ‘green’ list). At the same time, MSC was giving its certification to Irish-grown mussels, another species we said was good to go, even though this included dredging of all the known mussels beds in the Irish Sea. Clearly, we couldn’t rely on MSC as a guide.

‘Sustainability’ assessments such as these rely on information being available and on that information being reliable. We know that seafood fraud (i.e. what you order is not what you’re getting) is widespread and we also know that the system to monitor fishing in Ireland is unreliable and that illegal fishing has been rampant.

We stopped updating our seafood guide after a few years. One policy expert colleague, who was never keen on the idea of these consumer-centred initiatives, had warned me that individual action was unlikely to change the status quo, and that energy should be focussed instead on the politicians and making sure the regulations were enforced.

The campaign to ‘end overfishing’ in which we were involved a decade ago, was essentially successful. The EU said it would end overfishing by 2015 where possible, and by 2020 at the very latest while also committing to ending the dumping of unwanted catch (known as ‘discarding’). But this hasn’t happened so the policy focus hasn’t worked either.

In truth, it’s very hard to get any traction on campaigns for marine protection. When people are presented with the facts, they don’t necessarily change their behaviour in the way you might have hoped (e.g. through consumer choices). Politicians are not that interested in fighting for something they may know or care little about. We also found that, in Ireland at least, there is no such thing as ‘sustainable seafood’ – there is simply nowhere near enough management or monitoring to have any confidence that anything appearing on our plates isn’t complicit in the destruction of the oceans.

So is it time that the IWT just says – ‘stop eating fish’?

This week, I watched Seaspiracy on Netflix, and this is the central message: why are the big NGOs seemingly complicit with the collapse of the oceans in not asking people to simply avoid eating fish altogether?

Personally, I stopped eating seafood some years ago. I have also written before on this blog about the need to end industrial fishing; it’s simply too destructive, and even since I wrote that in December research has been published that shows how bottom trawling releases as much greenhouse gases as the entire aviation industry. Expecting the fishing industry to be a responsible player is not realistic and the level of monitoring and surveillance which would be required to restore faith would call the whole enterprise into question due its cost.

Ending industrial fishing will require the rupture of the power relation that has developed between the fishing industry and the national politicians (and their civil servants) who prop it up. This is difficult, but not impossible to envisage. However, this does not require shutting down all fishing.

I have been to coastal communities where fishing is still important, both economically and culturally, and I have spoken to fishers who feel as passionately as anyone about their livelihoods. These people see themselves as part of the ecosystem and have suffered from the systemic inequality and negligence of the state. Campaigners who insist that people are a part of nature cannot then say that nature should remain ‘untouched’ and ‘left alone’ in the kind of blanket way that is suggested by a campaign that says ‘just say no’ to seafood.

So yes, we will campaign to end industrial fishing, but no, we won’t be telling people to simply stop eating seafood.