What’s the point of industrial fishing?

What’s the point of industrial fishing?

The prominence of Brexit in the media was eclipsed this year by the Covid-19 health emergency but it has re-emerged in recent weeks due to the failure of the EU and UK to negotiate a future trading agreement. One of the sticking points has been fishing, an area that carries a sort of totemic importance despite its relative economic insignificance (the entire fishing and seafood sector is less than half of one percent of Ireland’s economy).

The tiny economic contribution is inversely proportional to the ecological damage that is wrought on the marine environment by fishing. Perhaps because this has been going on for a long time we have become inured to the ecological collapse of our oceans. Fishing however is not a monolithic business; there are the big boats and then there are the small boats. The big boats take the lion’s share of the catch, are concentrated in a small number of ports, and have the ear of government ministers and their officials (they literally sit outside the door of the negotiating room in Brussels every December when the quotas are carved up). The small boats are the bulk of our fishing fleet (c.80% of boats are less than 12 metres long), they are reliant on non-quota species (i.e. what’s left after the big boats have filled their bellies) and are not represented in Brussels at crucial meetings. While the big boat guys have said that a no-deal Brexit will be ‘game over’ for them, the small boats have said that the recent overturning of a ban on large boats fishing within six nautical miles of the coast is a far greater threat to their viability. 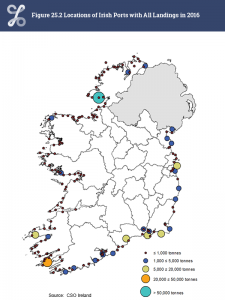 Big boats are concentrated in a few places, small boats are widely spread out around our coast

The collapse of the marine ecosystem, combined with the enormous dangers posed by climate breakdown, rising sea levels and extreme weather events is more important than the survival of the fishing industry. Many of us would like to see the promotion of the small boats, which, if properly managed, could be very low impact on the marine environment and form the kernel of distinctive local economies. Although these days I avoid fish, I do hope for a day when I can visit a coastal town like Baltimore in Cork, and order freshly caught turbot or pollack from the sea nearby, which I know is well managed for all its diversity. But we’re a long way from that.

Meanwhile, the industrial side of the house is facing a squeeze from the overdue implementation of the Common Fisheries Policy, which, way back in 2013, promised that all overfishing and dumping of unwanted catches would end by 2020. The politicians have failed to deliver on this and the government is being taken to the High Court by the Friends of the Irish Environment (and best of luck to them!). Instead of delivering a gradual implementation and putting in place the means to transition to less harmful forms of fishing, the Irish government and its EU partners have ignored their obligation, so that there is now a real possibility of a disorderly and abrupt shutdown of whole sections of the fishing industry, most notably bottom trawling but also much of the herring fishery.

Data from the Marine Institute shows that overfishing is getting worse, not better

When you take all of this in its entirety, we need to ask the question – what’s the point of industrial fishing? Apart from destroying the environment and driving more numerous and more diverse fishing activities out of business, it does nothing for food security. In the Western world eating fish is something mostly reserved for eating out. The bulk of the bottom trawling catch is for Nephrops (Dublin Bay prawns), most definitely not a crustacean that is sustaining the needy. So, can we do without industrial fishing completely – rewilding large parts of the ocean to retore biodiversity and deal with the climate crisis – and focus our efforts on management of the small boats and aquaculture which actually deliver for small communities?

The debate over supertrawlers may help us resolve the issue. Supertrawlers are universally loathed but I have seen no one stick their neck to out tell us exactly what one is. Sinn Féin’s Pádraig MacLochlainn recently called for supertrawlers in Irish waters to be banned, saying it was a “scandal” that two Dutch boats, each over 100 metres in length, were “allowed to hoover up the fish” off Donegal and that the Irish government should “put a stop” it. The Dutch boats were among 21 vessels registered in the EU over 100 metres in length, truly massive boats. There are no Irish registered vessels of this size although the Annelies Ilena, which now flies a Polish flag, was originally the Atlantic Dawn, built for Irish-man Kevin McHugh. It has been described as “the greatest fish killing machine the world has ever seen” but also by our then-Marine Minister Frank Fahey as “one of the proudest moments for the Irish fishing industry”. Anyway, the point is that Ireland has skin in the supertrawer game. Ireland has 17 vessels over 50 metres in length, still very big boats. I have a feeling that Pádraig MacLochlainn does not have these boats in mind in his call to have supertrawlers banned.

Helpfully, the International Union for the Conservation of Nature (IUCN) has defined industrial fishing as boats  over 12 metres long “with a capacity of >50 kg catch/voyage, requiring substantial sums for their construction, maintenance, and operation and mostly sold commercially, and that all fishing using trawling gears that are dragged or towed across the seafloor or through the water column, and fishing using purse seines and large longlines”. The IUCN says that industrial fishing should be excluded from Marine Protected Areas. This definition largely coincides with what I have differentiated here as the ‘big boats’ and the ‘small boats’ in the Irish fishing fleet. 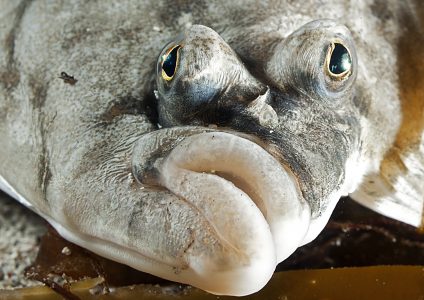 Plaice – if there were more of them, the small boats would be better off

Another important issue is the ownership of the fish. The marine is a public good, technically nobody owns the fish and other sealife. But yet the fishing industry pays nothing for it – basically we, as in Irish society, allow the boats access to the fish for free. Attempts have been made in the past to find out who exactly is benefiting from all this free fish, i.e. how is the quota of our fish is divided among individual boats. However, the Department of Agriculture, Food and the Marine have withheld this information. We do know that in the UK, over 50% of their quota has been sold off to non-UK boats, including supertrawers like the 119 metre, Dutch-owned Frank Bonefaas.

So we see that a public good has been privatised for the benefit of a tiny number of people at great public expense. The continuation of industrial fishing is an enormous social issue as well as an environmental one. We could do without it.