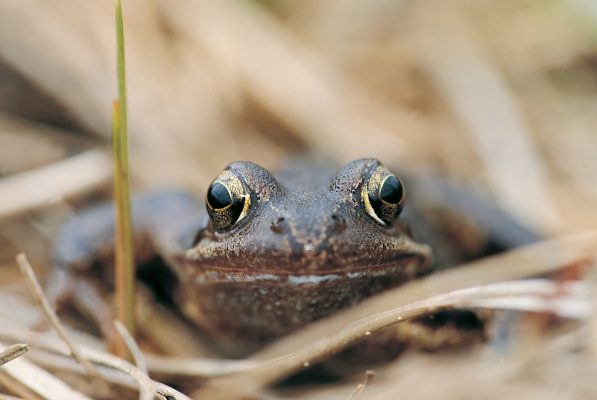 At this time of year, plenty of animals are only just waking up and getting down to business after a long hibernation. The common frog (Rana temporaria) is one such animal.

Common frogs are small amphibians that can be found all across Ireland, as long as there are suitable bodies of water for them to feed and breed in and places for them to hibernate. They come in shades of brown, green, and yellow, and have smooth skin and long hindlegs with webbed feet. Thanks to these long, muscular legs, frogs are strong swimmers and prodigious jumpers, which is useful for running away from all the things that want to eat them.

They’re easy to tell apart from Ireland’s other native anuran (frogs and toads), the natterjack toad. Natterjack toads have ‘warty’ skin, short legs, and a yellow stripe running down their backs. Natterjack toads are also much rarer, and don’t occur outside of a few specific areas.

It’s a bit unclear whether the common frog actually is an Irish native. There’s a case to be made that it isn’t, and that it was introduced from mainland Europe by ancient settlers. But there’s a much stronger case to be made that they are native, and the introduced ones just bolstered the existing population which managed to survive the last ice age.

Whether they’ve always been here or not, they’ve long since become an important part of the ecosystem. Because they don’t have any kind of poison or other natural defenses, they make a good source of food for hungry predators. Virtually anything that can catch them will eat them, including stoats, foxes, and birds of prey. Their spawn and tadpoles provide food for dragonfly larvae and newts, while the frogs themselves are voracious predators that help to control insect and slug populations.

Frogs are ectotherms (or ‘cold-blooded’ animals), so they can’t function properly when it’s too cold out. For that reason, they hibernate during the winter, and only re-emerge in February. As soon as they wake up, they begin to breed. Males will sit in ponds and call using specialised vocal sacs on their throats to attract the females.

Once the females arrive, males will compete to try and grab onto them in a special hold called amplexus. When a male successfully grabs a female, he hitches a ride on her back until she finds a good place to deposit her eggs, and then fertilises them as she lays them.

The spawn looks like a bunch of white jelly with black spots floating in the water. If it’s frogspawn, it’ll be floating in a clump, and if it’s toadspawn, it’ll be attached to vegetation in long strings. After about 4 weeks, the spawn hatches into tadpoles, which feed on algae at first before switching to a carnivorous (and sometimes cannibalistic) diet.

Around June and July, the tadpoles develop legs and metamorphose into froglets. Once they reabsorb their tails, they hop off into the undergrowth to feed and grow in preparation for hibernation in October. Froglets won’t reach breeding size until they’re 2-3 years old, and since they make such easy prey, not many of them survive to reach that point.

This is why each female frog lays around 1000 eggs at a time, sometimes even as many as 2000. Some of the eggs will just never hatch, a lot of them will get eaten, and plenty of the tadpoles and froglets will either get eaten by something or simply die of other natural causes. But by producing so many eggs at a time, the female almost guarantees that at least a few of them will survive to adulthood and carry on her genetic lineage.

With the incredible amount of spawn these amphibians produce, it’s no surprise that they’ve traditionally been associated with fertility. They also feature in superstitions about the weather: they can change the colour of their skin, and darker frogs are said to be a sign of impending rain. Frogs are also classically thought of as creatures of the underworld, and are associated with druids, witches, and other supernatural entities. Supposedly, the croaking of a frog was meant as a warning to its master that danger was coming. They were also thought of as messengers of the water god, who brought rain and purified water.

Of course, frogs change colour to try and camouflage themselves, and the croaking is just a way for males to catch the attention of females. But such stories are a prime example of how important the frog is to us, both from a cultural standpoint and an ecological one. Frogs might not be able to summon rain or purify water, but they do make a very good indicator species. They can’t survive in polluted environments, since they have porous skin that soaks up everything in the water. In places where pollution is taking hold, the frogs vanish. In a way, they are messengers that tell you when water is pure.

With so many farm ponds and ditches being inadvertently polluted by fertilisers and pesticides, and other ponds drying out earlier in the summer as a result of hotter weather, frogs are having a harder time finding places to breed. They’ve started migrating into more urban environments as a result, and that’s where you can help them most.

If you build a garden pond and keep it clear of fertilisers and pesticides, frogs will somehow find it and use it to breed. The best ponds are ones which don’t have any fish in them, since fish eat frogspawn and tadpoles, and if you have an established pond with a population of newts, frogs probably won’t be able to take hold there. But if you’re planning to make a new pond for your garden, it only takes a few extra steps to create an ideal habitat for frogs.

To make a pond suitable for breeding amphibians, make sure there’s lots of plant cover around the edges for them to hide in. In the rest of your garden, you can set up piles of rocks and logs for your frogs to hibernate in. Lastly, set up some kind of a ramp or step out of the water for newly transformed froglets to use to climb out of the water. Then, all you need to do is wait. No need to stock the pond with tadpoles taken from somewhere else. Frogs are very good at finding new ponds to lay their eggs in.

Frogs are worth helping out for their own sake, but if you have a vegetable patch or a flower garden which is under attack from slugs or other pest invertebrates, the frogs have you covered. They’ll hunt the pests and keep their populations low for you, so you don’t need to use any kind of pesticides or other control methods.