The Trouble with Turbines

The Trouble with Turbines

Russia’s brutal invasion of Ukraine has placed a spotlight on Europe’s fossil fuel dependence. The war has come on top of already rising fuel prices that, as I write, are seeing petrol prices near €2 a litre. Coincidentally, the UN’s Intergovernmental Panel on Climate Change (IPCC) this week published its sixth assessment report (AR6) which issued “a dire warning about the consequences of inaction” with the increasing likelihood of irreversible impacts to humanity and the natural ecosystems upon which all life depends. Seen in tandem, the urgent and overriding need to unhook our society from oil and gas could not be more obvious.

The most effective way of doing this is the rapid and widespread deployment of renewables, particularly wind and solar. In 2020, wind energy provided 38% of Ireland’s electricity[i], which was nearly entirely from land-based turbines (there’s currently only one Irish offshore wind farm off the coast of Co. Wicklow). The promise of vast arrays of offshore turbines around our windy coasts could see a supply of clean energy well in excess of domestic demand with the surplus used to create fossil fuel-free hydrogen to power the grid when the wind is not blowing. “We have the projects. We have the investment. We have the teams who can deliver. But this does not change the fact that we are losing time” the chief executive of Wind Energy Ireland told the Oireachtas environment and climate action committee this week.

I am absolutely, 100% behind these goals and want to see this infrastructure rolled out without delay. Which is why I find it hard to write about the need to prevent the installation of wind turbines in certain places. But careful readers of this week’s IPCC report will see why we must be cautious about where renewable energy infrastructure is installed. The AR6 report points out that the “degradation and destruction of ecosystems by humans increases the vulnerability of people” and that “unsustainable land-use and land cover change, unsustainable use of natural resources, deforestation, loss of biodiversity, pollution, and their interactions, adversely affect the capacities of ecosystems, societies, communities and individuals to adapt to climate change”. It also refers to ‘maladaptation’ – the focus on “sectors and risks in isolation and on short-term gains”, examples are hard defences against flooding or afforestation on naturally unforested land but it can include any infrastructure projects that harm ecosystems and biodiversity.

The IPCC concludes that “poor land use planning and siloed approaches to health, ecological and social planning also exacerbates vulnerability in already marginalised communities”- and this is exactly the trap we find ourselves in in Ireland. Draft Wind Energy Development Guidelines from 2019, and never finalised, maintain that “planning authorities should have full regard to biodiversity considerations in determining applications for wind energy developments”. However, the application of this has been patchy, at best. Words like Derrybrien and Meenbeg, where ill-advised wind installations resulted in bog slides, destruction of fish habitat and general landscape degradation remain open sores (20 years on from the construction of the Derrybrien wind farm, taxpayers are paying daily fines of €15,000 while it looks like the turbines will have to be removed entirely from this site following the refusal of An Bord Pleanála to grant ESB substitute planning permission). Who is answerable for these disasters? What lessons have been learned?

Wind turbines are not the bird killing machines that some make out and indeed many objections to wind farm planning applications are based upon the visual intrusion in the landscape (a perfectly legitimate concern), sometimes using biodiversity as a spurious line of opposition. But turbines are a hazard for certain species, particularly large soaring birds (eagles, swans etc.) which can be killed on collision with turbine blades. While many birds will avoid turbines, rather than be directly injured or killed by them, this is a problem if the turbines are located in places important for feeding or nesting – effectively resulting in habitat loss for that species.

The other main issue is where wind farms are proposed on peatlands. Wind farm developers are drawn to peatlands sometimes because these are the windy places (especially in upland areas) but also because they are seen as a kind of no-man’s-land: not productive for farming, sometimes in commonages or on state-owned land with failed forestry plantations. Peatlands continue to be seen as useless waste ground in search of a purpose. Despite the overwhelming evidence in favour of peatland restoration as a benefit for climate, biodiversity, water and people, we are still seeing many wind farm applications being made in these sensitive sites. Across the countries of northern Europe it is not uncommon to see wind turbines on agricultural land, in among crops or grazing animals… why not here?

Last month, Kerry County Council refused permission for a seven-turbine wind farm on bogs at Ballynagare, between Listowel and Ballybunion. A large number of objections had been received by the County Council, mostly from locals who were concerned about the impacts to biodiversity and river water quality while pointing out the value of peatlands for storing carbon. Among the environmental groups objecting were the Irish Raptor Study Group (IRSG), which pointed out that Ireland has yet to fully transpose EU environmental law, particularly in relation to the protection of birds outside of Special Protection Areas, despite a European Court of Justice finding on this matter 13 years ago. The IRSG felt that the proposed Ballynagare wind farm would “impact on an internationally significant and important breeding and wintering Hen Harrier population” (a threatened bird of prey). BirdWatch Ireland made similar points, noting that 29 species of bird were using the proposed site, including many of “international importance” while suggesting that “instead the cutover bogs should be restored to support this wealth of bird life, plant life and other wildlife” as well as capturing carbon and protecting water. Inland Fisheries Ireland, a state body, expressed concern that the wind farm would require continued pumping and drainage of the remnant peatland, leading to pollution of fisheries habitat downstream. This pumping also ensures that the peat continues to spew out greenhouse gases.

A most egregious example of a proposed wind farm in the wrong place is the site of the mooted Shannon Wilderness Park near Lough Ree in Co. Longford. Here, Bord naMóna promised the local community over 20 years ago that once the bogs were worked out, the land would be restored as a refuge for wildlife. It would complement existing protected areas around Lough Ree, which were recently described by the local National Parks and Wildlife Service ranger for the area as “the most important site in Ireland for breeding water birds”. The potential here is phenomenal – a wildlife experience destination like we have never seen while giving much needed space to a whole suite of birds and other wildlife that are currently threatened with extinction, such as curlew and lapwing.

In 2020, a wind farm application was nevertheless progressed but this was shot down last year by the High Court (after being approved by An Bord Pleanála) after a judicial review found that Bord naMóna had not supplied sufficient detail on the project. In the meantime, the pumps are chugging away on the bogs 24/7, preventing the rewetting of the peat least wildlife gain a toe-hold, such as the flocks of Whooper Swans that sometimes gather in winter, and that would, in turn, jeopardise the wind farm application.

Longford County Council, which supported the Shannon Wilderness Park idea in the early days, wavered at the oral hearing for the planning application, but then seemed to find their voice – backing those who maintained that wind turbines would not be compatible with the original vision for the area (the IWT among them). 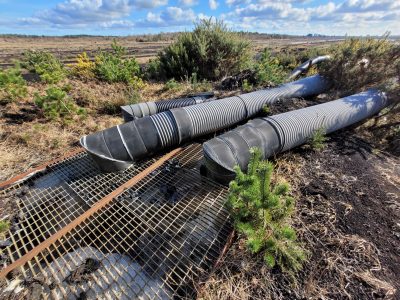 Pumping the water from bogs at the site of the Shannon Wilderness Park – releasing carbon, polluting water and keeping wildlife away

We now learn that Bord naMóna want to submit a new planning application on these lands. A new County Development Plan for Longford backs the Shannon Wilderness Park and wants to apply for UNESCO Biosphere status for the area – but stops short of saying that the land is not suitable for wind turbines. How many UNESCO biospheres are there that are sites of wind farms? Ultimately, we’re looking at the ‘maladaptation’ referred to by the IPCC – the pursuit of short term gains over a holistic view that would value the restoration of these bogs for their multiple values.

The IWT recently wrote to minister Eamon Ryan (who has oversight of Bord naMóna) asking for his intervention but we have not received a reply. Niall Dennigan, the local champion for the area, has also written to the chief executive of Bord naMóna for a meeting, but so far, no reply either. In the meantime, we are canvassing politicians in the Longford area as well as working closely with local community representatives.

I don’t like objecting to renewable energy projects at a time of such acute crisis. But in the absence of any real action in the face of the biodiversity emergency I feel we have no choice. We can hope for a planning system that values protection and restoration of ecosystems as an integral element to climate action, and not opposed to it, but so long as we see planning applications for wind farms on peatlands we know that that day is some way off.