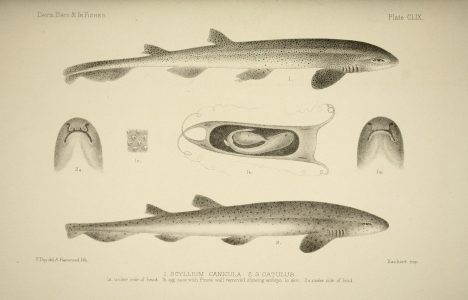 Commonly known as dogfish, the small spotted catshark is one of 71 cartilaginous sharks found in Irish waters. From a recent report published by the National Parks and Wildlife Service (NPWS) (Clarke, et al., 2016) on the status of sharks in Irish Waters they are classified as “least concern” as they aren’t generally fished commercially.

The lesser spotted dogfish is found throughout the Eastern Atlantic from West Africa to Norway and is found in the Mediterranean and black seas. It can be found in all Irish waters and can survive in a variety of habitats.

They, like a lot of sharks and rays, are oviparous meaning they lay eggs (as opposed to viviparous who give birth to live young). They attach these eggs to seaweed or kelp and the sharks develop inside them. They can take 5-11 months to develop depending on the water temperature, developing more slowly in colder waters. 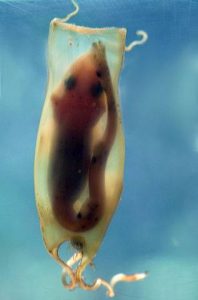 The egg cases can wash up on shore and look like small bits of dry seaweed they are useful indications of the presence of the sharks in the water. The females can grow up to 52-65cm while the males are generally smaller at 49-55cm. In the wild the breeding season lasts between 10-11 months and they can lay up to 60 eggs a year.

They can be consumed and have been used for fish and chips but due to their tough skin that needs to be removed they are not fished commercially.