The Case for Beavers in Ireland

The Case for Beavers in Ireland

I have been agog these last few years watching in envy as beavers have popped up across Britain. Having gone extinct in the 1600’s these famously industrious rodents are now back to work at Knapdale Forest in Scotland as well as ten sites in England in which they are either established or imminently about to be reintroduced. A project in Wales is looking close while beavers now enjoy protected species status in Scotland. Twitter accounts[i] give regular updates on their progress (which has not been all plain sailing) sometimes with engrossing video footage of the animals going about their business. I could watch them all day hauling pieces of wood from A to B, shoring up the dams and lodges or munching on vegetation while leaning back on their paddle-like tails. Engrossing. 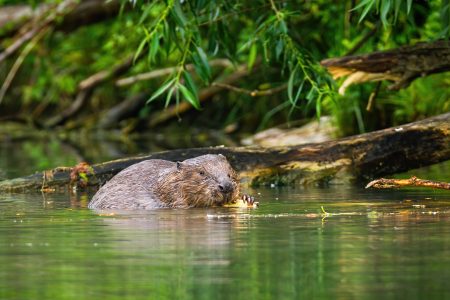 Beavers are not just adorable and fascinating animals. They are what a recent article in British Wildlife described as “agents of change”[ii]. After their release in 2009 in Knapdale Forest in the west of Scotland they immediately set about changing the entire landscape. They felled mature trees and created dams, thereby raising the water levels to flood large areas, creating ponds and wetlands. This is a very creative form of destruction as our broadleaved trees are actually adapted to being felled (think hedge-laying or coppicing to promote vigorous new growth which mimics this natural process).

Where there are beavers there is a flourishing of life. Studies in Sweden found that plant diversity was up to a third higher in beaver ponds compared with beaver-less areas. In creating these open wetlands, the beavers are promoting the habitat which favours the aquatic plants they prefer to eat – pretty cleaver eh? A bit like farming. The shallow, unshaded wetlands are quickly colonised by all manner of invertebrates as well as amphibians, birds and mammals. Everything from teal and green sandpiper to bats were found to thrive at beaver ponds in Finland. Initial worries about beaver dams creating obstacles for migratory fish like salmon and trout are likely unfounded: a study in Norway found that these fish are able to make their way through them. In shaping their landscape the beavers create the messiness which, in nature, provides opportunity for a vast range of other plants and animals.

But their benefits don’t stop there. In reshaping rivers and wetlands their dams have been shown to improve downstream water quality and ‘slowing the flow’ to reduce peaks of flooding and drought. Of course, more studies are needed but the wide-ranging benefits of beavers are likely to become more apparent as this research emerges.

So can we have them in Ireland? There’s no question in my view that they would be of benefit, helping to restore naturalness to our collapsed river systems while – at very low cost – helping to alleviate the affects of water pollution. On the novel landscapes of the soon-to-be-rehabilitated midlands bogs, they would accelerate the rewetting of peatland and so would be climate action heroes.

But there’s a snag – there is no evidence that beavers were ever present in Ireland and so, unlike Britain, this would be an introduction rather than a reintroduction. That is likely to set many ecologists into a spin from the get-go. Accepted guidance from the International Union for the Conservation of Nature is clear that restoring plants and animals to their original range is a good idea – the corollary being that it’s not a good idea if the said plant or animal was never there in the first place. This is for good reason, not least that introducing species has gone disastrously wrong in the past: just look at the rhododendron-filled valleys of Waterford or Kerry. 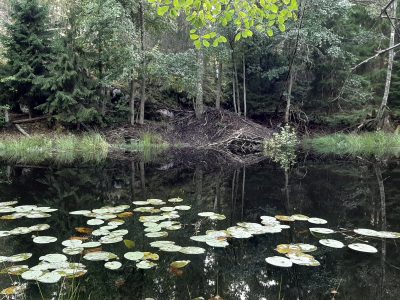 A beaver lodge on a pond in Sweden

On the other hand, beavers are highly unlikely to be invasive in Ireland because they are adapted and have evolved in Western Europe (unlike rhododendron which originates in the far Caucuses region).

In any case, the issue with ‘invasive species’ in Ireland throws up uncomfortable questions – such as why native wild boar has been listed in legislation as ‘alien invasive’ or why invasive (but commercially profitable) Pacific oyster and Cherry laurel are not. Domesticated sheep – with origins in the Middle East – are free to roam the hillsides of Ireland, wreaking ecological havoc. An unknown, but likely high, number of non-native pheasants are released into the Irish countryside annually with unknown impacts on our native wildlife but this seems to arouse little concern.

So, if we’re comfortable with pheasants and sheep and Pacific oysters – why do we need to be a stickler for the rules around beavers? I can image another criticism will be that it creates an arbitrary bar to what we should be introducing/reintroducing, that humans are just playing around with the ecosystem. Where would it all end?

This is entirely valid – like beavers, there is no evidence that wild cattle or horses were ever in Ireland since the end of the last Ice Age. This doesn’t mean they weren’t here (evidence in this field is scanty) and frankly it’s hard to explain why we didn’t have beavers given that our sodden island would have been perfect for them and it was only a flap of a flattened tail between the north coast of Antrim and Scotland. But we’ve no issue with cattle or horses here either.

It’s also too late to be warning about the risks of playing god – humans have been playing god since their arrival, more like the Hindu deity Vishnu – destroyer of worlds – type of god. What we do, or don’t do at this point in time will mark the destiny of the natural world for good or for ill. Not playing god is not an option.

Lastly, were beavers to somehow run amok to create some imagined economic disaster, being slow and relatively large, it would be an easy task to gather them up and re-locate them. So what are the arguments against introducing beavers? I can’t think of any, so I’m going to put my cards of the table: yes we should be bringing beavers into Ireland on account of the clear advantages they can bring to restoring our shattered ecology. Let them be our allies in the fight to clean our waterways, reduce flooding and locking up greenhouse gases. And maybe some day I’ll sit in a hide with a flask of tea and I really will get the chance to watch them all day.